In 2006, Bam Magera (of Jackass fame) and his brother Jess (drummer for CKY) teamed up to start their  Pennsylvania-based record label imprint Filthy Note Records. In the years since, they have released albums from the likes of Vains of Jenna, Viking Skull, F**kface Unstoppable/FFU, Evesdroppers, Sovereign Eagle, Unkle Matt & The Sh*tbirdz, and various film soundtracks. While many people shut down and relaxed during the COVID-19 pandemic, the Magera brothers picked up their work in an attempt to stay busy.

They teamed up with many of their famous and musically-talented friends to record a handful of singles for release in support of a handful of good causes. Filthy Note‘s latest release is a cover of Blur‘s 1997 smash single, “Song 2,” of which all proceeds raised being donated directly to the Victims First charity fund set up to help families who lost their loved ones in the tragic Ulvade, Texas School Shooting. It can be purchased here.

We’ve always enjoyed everything Jess & Bam Margera have collectively dropped both cinematically and musically and figured now would be as good a time as ever to reach out to Jess to learn a bit more. So, we reached out to Jess on a whim through Twitter, who happily obliged our random interview request.

Check it out below and go support Jess Magera and his gang of musical friends supporting great charities at Filthy Note Records’ ever-evolving Bandcamp page. 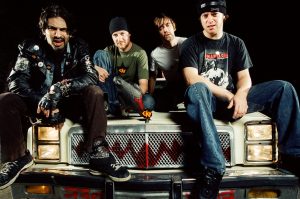 When and where was Filthy Note Records founded and started?

In 2006 I did a record with a British metal band called Viking Skull, Bam and I were huge fans of them and we wanted to help them get a bigger following in America, so that was a big motivation to start the label

Who are/were the bands or artists signed to the label?

A lot of those were just jams I did with friends during the covid lockdown, and then when we were dialing in the studio at castle bam we had people dropping by and we were just having a blast jamming tunes and trying out microphones.

Who appears on the Untitled Album and how did you go about getting all of these talented musicians involved?

Neil Fallon, Anthony Green, Chad from CKY, Chuck from Alice Cooper, Dave from Sum 41, Jean from Hank von Hell, Kones from Tenacious D, Daniel Davies, Vern from CKY, Joel from Killswitch Engage, Per Wiberg from Opeth, Dean Ween, Greta Hotmer, Tyler from Paradise Slaves, and Cody Carpenter. It’s basically just friends that wanted to get involved because I was doing it for charity

What inspired you and your crew of musical misfits to record covers of Ween’s “Did You See Me?,” Joe Cocker’s “Feeling Alright,” and Blur’s “Song 2?”

I picked the Ween song because it’s one of my favorite Ween songs and it was basically just a demo they did for their B sides album and felt it needed to be recorded better, haha. Neil picked Fend the Blur song was just I had a bunch of friends over and we were talking about our favorite 90s one hit wonder bands.

What did your typical recording process(es) look like for the Untitled Album and these recent guest-heavy Bandcamp singles?

A lot of it was just sending wav files back and forth because we were all sitting at home not on tour and we don’t do well with having no tour dates on our schedule. So it was mostly a distraction from being prisoners in our houses haha

When purchasing any of Filthy Note Records’ string of recent releases on Bandcamp, what charitable causes will fans be directly supporting?

I was watching the news and got extremely angry and sad at the Uvalde elementary school shooting and I saw something online about a charity called victimsfirst that was raising money for the families affected. I couldn’t imagine going through such a catastrophic loss and unfortunately while you are in the grief process there are still bills that need to be paid. So if recording some music with friends can help them out paying their rent or whatever, that makes me a pretty happy guy.

In addition to or aside from the artists featured on the Filthy Note Records Bandcamp singles, who else has recently been recording music at Castle Bam Studios?

The most recent was a band from Nashville called See Creatures, who were amazing. We also had G.Love and Special Sauce in, and Mike Hampton aka Kidd Funkadelic from Parliament Funkadelic

He comes over to hang out and skate with his kids all the time so it just made sense to film it in the skate barn.

I have at least 4 albums done and ready to go soon, so I am guessing at least 2 or 3 of those will go through Filthy Note unless someone makes us a better offer, haha

We have been good friends with Hank for a long time and he always wanted to do a song with us. It was like getting punched in the gut with brass knuckles hearing that news. It was both amazing and extremely sad mixing the song realizing that its probably the last vocal track he did before passing.

I’d be remiss to end this interview without asking… what’s the current status of CKY? When should we look to hear new music from you guys?

We are about halfway done recording our new album. It sounds amazing so far and I can’t wait for you guys to hear it.