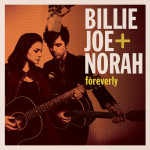 Green Day frontman Billie Joe Armstrong and jazz songwriter Norah Jones have teamed up to record a collection of cover songs. Foreverly was inspired by The Everly Brothers’ 1958 covers album, Songs Our Daddy Taught Us.

Billie Joe and Norah, as they are dubbed on the album, have joined forces to create a reinterpretation of the Americana collection, essentially recording a covers album of a covers album. The classic country sound will see the duo leaning more toward Jones style of music than that of Armstrong. Armstrong discussed the project saying:

“I’ve been a big fan of The Everly Brothers since I was a little boy. A couple of years ago, I discovered Songs Our Daddy Taught Us for the first time, and I fell in love with it. I was playing it every day and thought it would be a cool idea to re-do the record, but with a female singer. I thought of Norah because she can sing anything, from rock to jazz to blues, and I knew her harmonies would be amazing. I thought the songs would take on a different meaning working with her, and she has a really good ear for arrangements. I was mainly intrigued by these old traditional, country songs, and hymns. When we were done with the album, Norah looked at me and said, ‘I bet you didn’t think you were going to make a country record, huh?'”

The album will be released by Reprise Records on November 25th. You can preorder the release and stream the first single Long Time Gone here.

Frick are a lo-fi garage pop punk band from a bedroom closet in Salt Lake City, Utah. The band have…

Celebration Guns are preoccupied with time. It's clear in the titles of their last two releases, 2020's On Aging Gracelessly and 2021's The…

Those lovely folk at Alcopop! Records are tumbling towards the end of a jam packed 2022, and in the festive spirit are…

Trioxin - We Are Horror Records

Use The Daylight - Little Rocket Records